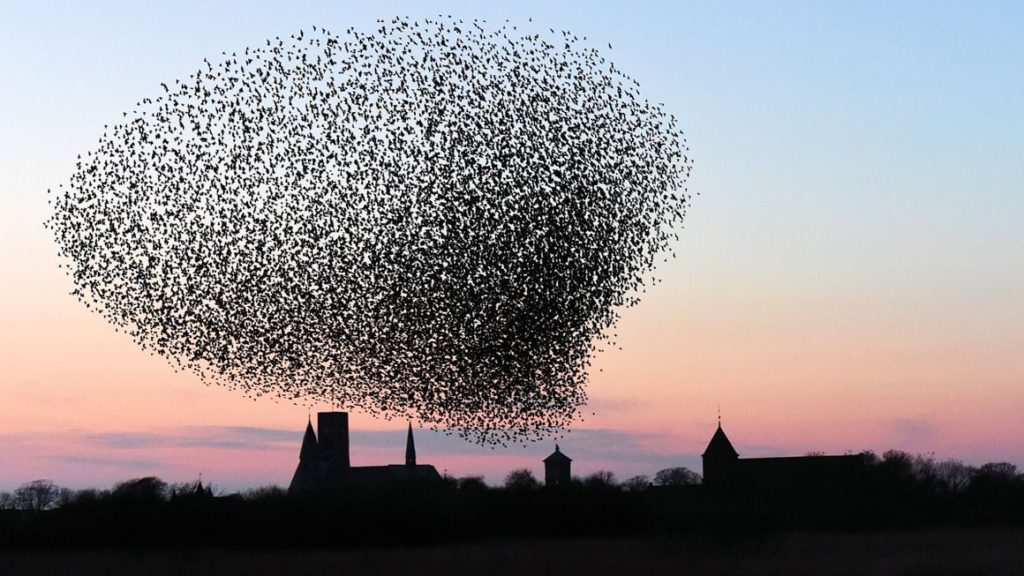 In Denmark we have a phenomenon that we call “Black Sun”. It happens in the fall when thousands of starlings gather in the marshlands of Jutland and prepare for their yearly winter migration. The picture above is taken over the 1300 year old town of RIbe.

First, let us be clear that we as human beings will never match the ability of the starlings; the vast numbers of birds in the groups and the velocity with which they move and change direction – we are not genetically structured that way. But we can achieve something else, which in reality is even more amazing, although maybe not as spectacular. People in a small cross-functional, self organizing team can achieve a unique ability to make decisions and generate ideas with surprising velocity and accuracy – even when dealing with challenges in the complex domain. We call this situational awareness, and the phenomenon is known from sports teams, rescue services and special forces in the military. The expression encompasses both the group’s mental comprehension of the challenge as well as the maneuverability in responding.

For some years organizations have focused on teams, teamwork and re-teaming. At least from World War II, there have been special forces in the military that have been based on teams, and we know the positive characteristics of high performing teams quite well. J. Richard Hackman, who was a researcher of organizational interplay, started to study teams in the 1970’s.

In 1988 Peter Scholtes wrote the book “The Team Handbook”, which became a kind of bible for all team related work. Largely, all concepts regarding high performing teams can be deduced from this book. We will here adopt its definition of a team:

“A team is a small number of people with complementary skills who are committed to a common purpose, performance goals, and approach for which they hold themselves mutually accountable.” – Peter Scholtes

In the year 2001 Ken Schwaber wrote the book “Agile Software Development with Scrum” and a new chapter in the chronicle of teams started. Scrum – as the reader might recall – puts a lot of emphasis on what development and project challenges are best worked on in a small cross-functional, self-organizing team. The fact that Scrum has become so widespread has made teams more popular than ever, but unfortunately it has not always resulted in good teams. Scrum merely presupposes that teams exist, but it doesn’t say anything in particular about how you foster them.

We could approach many different aspects of teams, but we will zoom in on the aspect of situational awareness.

In one book and article after another, it is emphasized how a foundational and deep trust between team members is a prerequisite for all good things in teamwork. We could write another book about that, but for the sake of this article we will assume that this trust is already present.

It is a precondition, however, that there is an awareness that it takes time to develop a good team, because trust takes time to build up. As human beings our primary goal seems to be survival, so very often we might be sceptical at the start; what is the guarantee that others are genuine and good-natured?

Trust emerges over time when a team has solved different, often challenging tasks and has accepted that everyone will do what they say and will put the Team’s goals above their own.

There is no instant pudding – W. Edwards Deming 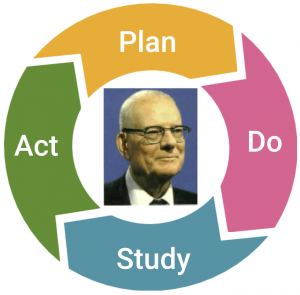 W. Edwards Deming introduced his PDSA cycle connected to quality improvement before World War II. The principles go back to Walter Shewhart and describe how you improve the quality of your work:

From our viewpoint, this PDSA pattern is the backbone of all serious teamwork. It is the hub around which all constant learning and improvement revolves. Within Scrum and other agile methods there is the activity “Retrospective”, where the team reaches a cadence, stops and looks back in an attempt to learn from the immediate past.

This is familiar material, very sensible, rational and broadly accepted. From our viewpoint it is the first step towards situational awareness at a higher level. Teams need this part in place in order to be on their way towards constant improvement.

However, there is a more subtle dimension, which rarely sees the light of day, and that is how teams come to achieve a more subconscious intuitive ability to act together. 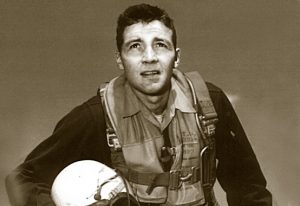 John Boyd was an american fighter pilot and as arrogant and flamboyant as they come. But he formulated his “OODA Loop” in order to describe, how we as people act and respond to the world around us . The model achieved great influence on the design of fighter aircrafts and on maneuver warfare. It is often depicted this way:

At first sight the OODA loop seems very similar to the PDSA cycle. There is talk of feedback, of data-collection, reflection and action. However, the OODA Loop contains quite a few more details, especially when you dive into Boyd’s explanations of them.

First, Boyd was focused on how, when people try to control their surroundings, there is both a “Feed forward” and a “Feedback” mechanism. Feed forward is where we let our theory or model of reality guide us to do one thing or the other – expecting to achieve a certain result, meaning we have a hypothesis on how things are connected. Feedback then is the constant observation of results: is it like we expected? Or should we adjust our perception of reality and do something slightly different?

Boyd was also very interested in the “Orient” phase, the intuitive and partly unconscious mental build up of our model of reality. When we are really trained in what we do, then we can react directly from this phase with what Boyd calls “Implicit guidance and control” without going through a conscious analysis and decision phase. This is much faster than our rational, conscious layers are capable of reacting. In a situation of conflict this superior velocity can determine who wins. This is in full accordance with Daniel Kahneman’s theories, which we will look at at the end.

Boyd’s ideas were born out of situations of conflict – originally air combat, a matter of life and death. In those situations, whoever goes through the OODA loop faster wins:

But this is only the simple part. If you can change direction or do something unexpected very quickly and intuitively, then you can interrupt the OODA loop of the opposition:

“The intent is to shatter cohesion, produce paralysis, and bring about collapse of the adversary by generating confusion, disorder, panic, and chaos.” – John Boyd

What we are talking about here though, is of course not air combat or opponents but about teamwork. Boyd’s theories can, however, be applied here with great success in a special upside-down way.

Translating it into Practice

When we work in Teams, the fundamental thing of course is that together we constitute the whole, we are not opponents. Boyd’s insights though can give us a lot of input on how we can come to operate as a unit – also intuitively. If we as a Team have a common or synchronized Orient phase, then we can react intuitively together and have this sublime situational awareness. Most people have observed this in certain sports teams, where the team members seemingly have joint awareness about where the ball will land, before it is sent on its way.

The aim is therefore to try and achieve the opposite of what Boyd said about destroying the opponents OODA loop. When cooperating the point is to do everything possible to build up and support the others and their individual OODA loops.

More important than anything, this starts with transparency. Team members must be able to trust that what they see in the other team members is genuine. Transparency only emerges if there is a widespread degree of trust in the team, otherwise most people will fall back to building up the best image of themselves and their own efforts. If reality cannot be seen and known, you cannot begin to hope to react optimally. So here follows the first piece of good advice:

Transparency is hard though, and people become vulnerable, so because of this, transparency has to go hand in hand with a disciplined respect towards each other. This leads to the second piece of advice:

The following is a series of pieces of advice that still are somewhat related to the ones above mentioned:

When the team members continuously do these things and solve complex tasks together, then this extraordinary situational awareness emerges, which will enable them to react intuitively and implicitly, almost before decisive information is available. This is where good teams become great teams.

This then leads us to the last point, which also supports the argument. 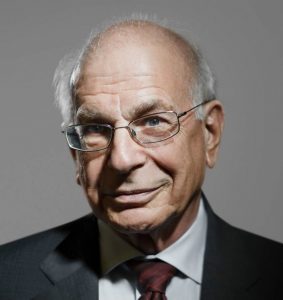 Daniel Kahneman is a Professor of Psychology and a Nobel Laureate in Economics. He has a couple of inputs as well as to how you achieve this specific situational awareness. Kahneman is especially known for his arguments for the human tendency to act deeply irrationally when it comes to making financial decisions. We are often controlled by cognitive biases.

Basically, Kahneman describes our decision making process as an interaction between two parts of our cognitive system:

Kahneman’s book “Think fast and Thinking slow” has 500 pages and is filled with information, so we do not come near doing it justice here. But the connection here between Boyd’s “Orient” phase with the possibility of “implicit guidance & control” and Kahneman’s “System 1” with the intuitive reactions almost leaps at you. To us at least Kahneman’s solid scientific arguments help give Boyd’s explanations weight and substance.

Kahneman explains just how you can train your System 1 to become increasingly more equipped in handling challenges intuitively. This is done by constantly building up an insight into the area you work via constant learning based on qualified feedback. So this is exactly what the challenge is for teams, who want to reach this extreme situational awareness, to learn and train together and constantly give precise and respectful feedback.

We can achieve situational awareness and maneuverability!

Being in a team we have the possibility of reaching this level of a multifaceted joint situational awareness by creating radical transparency and providing precise and respectful feedback. It is required of course that we have the foundational trust in the team, which is also what makes us willing to listen.

If an organization is built according to the principles of Agile Lean Leadership, of relatively independent circles cooperating together, then we also need to use this insight across the teams in order to support their joint OODA loop, so that we can achieve maximum situational awareness and maneuverability. The principles are the same, one level higher.

Out of all the listed pieces of advice above, let’s now end by highlighting the advice by saying aloud what we intend to do now. Then the others in the team will have the possibility of correcting us, stopping us from making mistakes and growing towards greater quality of work. We will never match the starlings and “black sun”, but we can do something different and just as exciting. 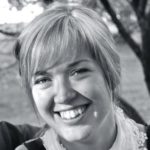 Translated to English by Anne Due Broberg and Paul Norton, from an article in the Danish magazine Projektledelse (Project management) by René Figgé and Kurt Nielsen, read the original here…