Through the last articles I investigated some of the studies and narratives about management and leadership, and how the West was lost to that particular style of management that can be wrapped up under the Neo-Taylorist label (See for example here… )

In this article we will pursue the topic a little further and try to make a comparison between the two main styles of management in question. Actually I will prefer to reserve the term Management for the Neo-Taylorist view and use the term Leadership for the approach “on the other side of the fence”, this is what we have come to call Agile Lean Leadership. Lots of writers and thinkers have coined terms like Radical Management, Management 3.0, Managing for complexity, Beyond budgeting etc. to illustrate points of the subject. 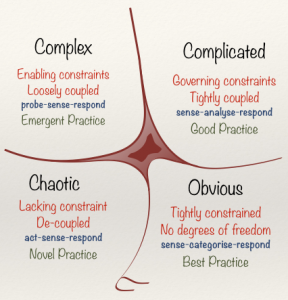 This is then a humble attempt to extract a collection of comparisons, statements and explanations to give an overview from my present viewpoint. I will often refer to Dave Snowden’s complexity model, Cynefin, and its four-five domains: Obvious (Simple), Complicated, Complex and Chaos plus the unfortunate Disorder, where we have not realized which domain, we are in. I will be arguing that many of the problems stems from misunderstandings of the domains we operate in, effectively operating from the Disorder domain with failure as a result. Cynefin will be discussed in a later article.

The two sides of the fence

Here is then a list of features and properties of Neo-Taylorist Management (NTM) set against those of Agile Lean Leadership (ALL). It is inspired by many different people, I have tried to make a sweep across the spectrum and collect 10 top points to make. Several other points could surely be made with equal validity:

1. Organize primarily along the lines of the customer

2. Organize for management or leadership

3. Organize for efficiency or learning

9. Work on people or the system

So is this good or bad?

Recently I took some extra education where the lecturer presented ways of working with Agile and Lean in large setups. He repeated several times, that he did not have any ethical views on good or bad, only on whether certain methods or patterns were useful in order to attain the objectives chosen to optimize for.

It is a noble goal to be totally objective, but outside pure mathematics it is something rarely seen with complete integrity. We all let our value systems shine through our arguments.

The writers and thinkers that have contributed to what we now call ALL, don’t try to hide the fact that they are considering not only “what is?”, but also “what ought to be?”, and that takes us into the territory of ethics.

We cannot claim that companies that are organized the NTM way will always lose. Big companies with incredible cash-reserves, unpleasant business practices and an exploitive attitude can be successful for a long time. Brute force rules very often, monopoly is a factor if customers or employees have no options to go elsewhere, people on business schools are taught how to create “customer-lock-in”, keeping the customer tied to a product or a service against his wishes. But it is a pressure-cooker heating up, some day in a crisis a revolt can erupt. It happens for the bully in the schoolyard, companies, and dictators.

The ALL principles keeps an organization a bit humble and focused on serving the customer, the employee, the society at large and the shareholder. It keeps everybody alert and prepared to react to the weak signals of change. It can still be hard and you can still lose, but your chances long-term are improved, and that is all man can ask for.

In the end you have got to ask yourself the question: “What style of leadership is it that I want to be in and be associated with?”