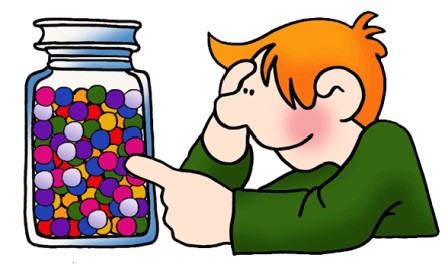 One of the controversies that people currently delight in getting upset about is the question of whether teams working the Agile and Lean way should estimate or not. The controversy is especially vibrant in the software community. 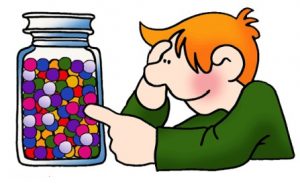 Without diving into the midst of this whirlpool that is a topic for another rainy day, I will try to take another angle on estimation, claiming that when done properly estimation is a great way for a team to build knowledge collaboratively and iteratively.

For the sake of the argument, we will assume that there are situations where the estimates of effort, value, risk and complexity matter. That there are situations where Product Owners have to choose between working on different things based on how much value is generated from a limited budget for example. Let us also assume that teams collectively have some idea of cost based on experience and that stakeholders are able to express views on experienced value of different things.

In those situations Product Owners have to prioritize based on these expectations – estimates. They do not have anything else; the future is not here yet. In those situations some sort of predictability is of the essence, and the more precise the better. It is therefore a worthwhile effort to learn how to do it.

These four estimation methods are said to represent a hierarchical structure where analogous estimating represents the least accurate method, and bottom-up estimating represents the most accurate method. Readers can explore those techniques at their leisure. For now it suffices to say that what we are about to present is in fact a way to combine all four in a fairly useful yet inexpensive approach.

Before starting for real, I would like to make the comment that the claim of bottom up estimating being the ultimate and the most accurate, rests on the assumption that the work estimated is in the ordered domain (complicated or obvious) where sufficient knowledge does exist. In many situations that is however not the case, and such an effort becomes a waste of time.

When the work that has to be done has a significance of complexity, in situations where there is only  fragmented knowledge available, then estimation requires collaboration and trawling together for common understanding and building up knowledge.

The methods we are to use are consequently not just about getting a number, but are in at least equal measure about facilitating collaboration, triggering people to come up with information they have and use the collective experience.

When estimating a certain property of a proposed deliverable, the purpose is to develop the best possible common understanding among those who are involved and make decisions within the time and budget constraints, so that they can make wise decisions.

A couple of things to note: Firstly it has to be done fast; experience shows that spending more time after a certain initial investment tends to degrade the quality of estimates. Secondly with increasing complexity typically there is increasing uncertainty in numbers produced; it is wise to always work with these number as ranges.

We have recently introduced a new version of our agile cards with cards for different estimation scenarios. Let us step through the different methods.

Estimation Poker (EP) or Planning Poker® is a workgroup method popularized by Mike Cohn of Mountain Goat Software. You can read more about it here…, there is even an online version here… We have chosen to use a series of cards that is an extension of the sequence promoted by Mike Cohn. EP can be used by a group of people to estimate any numerical value; in Scrum it is used to estimate effort, cost and business value. 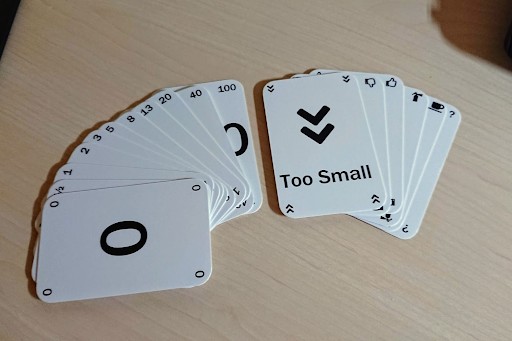 For the sake of simplicity we shall use the Scrum terminology here and assume the objective is estimation of effort in delivering a deliverable. Here is how it goes:

A very good extension to basic estimation poker is to add assessment of uncertainty.

The set of cards for the Estimation Poker is an extended set with cards for different purposes:

The Concept of Story Points

People often struggle with the concept of story points or relative estimation against reference stories. SInce the real world need time and  money, why do it any different then? Here some ideas

Some people prefer to use averages when a Team passes different estimates. The practice is discouraged because it adds an impression of precision that is typically not warranted in stable knowledge. It can therefore mislead stakeholders to trust too much in the estimates.

Some people allow Team members to use two cards for estimation, but it is not recommended. It defeats the purpose of showing stakeholders that these numbers are rough estimates; adding more detail usually obscures this fact, like the use of averages, mentioned above.

Other uses of Estimation Poker

Estimation Poker can also be used for other things. The most obvious use, is to use it for estimating Business Value, in that case of course it is different people that does it, the stakeholders or users, who have opinions about value. If estimating value, references of value are needed, and worst case estimates of course are smaller than best estimates.

Why this method is useful

This idea of estimating like this in a Team using a limited set of outcome possibilities has a lot of useful effects:

The whole method is a way involving everybody, to create the mental triggers for people’s knowledge to come to the surface. We cannot just say what we know, “we only know what we know, when we need to know” (Dave Snowden). It is of course useful to get a couple of numbers to wok with, but it is at least as useful to have such a work group method that enable people to reach a common understanding. Estimation seen as a knowledge building effort is NOT waste, it is also a way of working through the process of reaching a fairly robust common understanding.