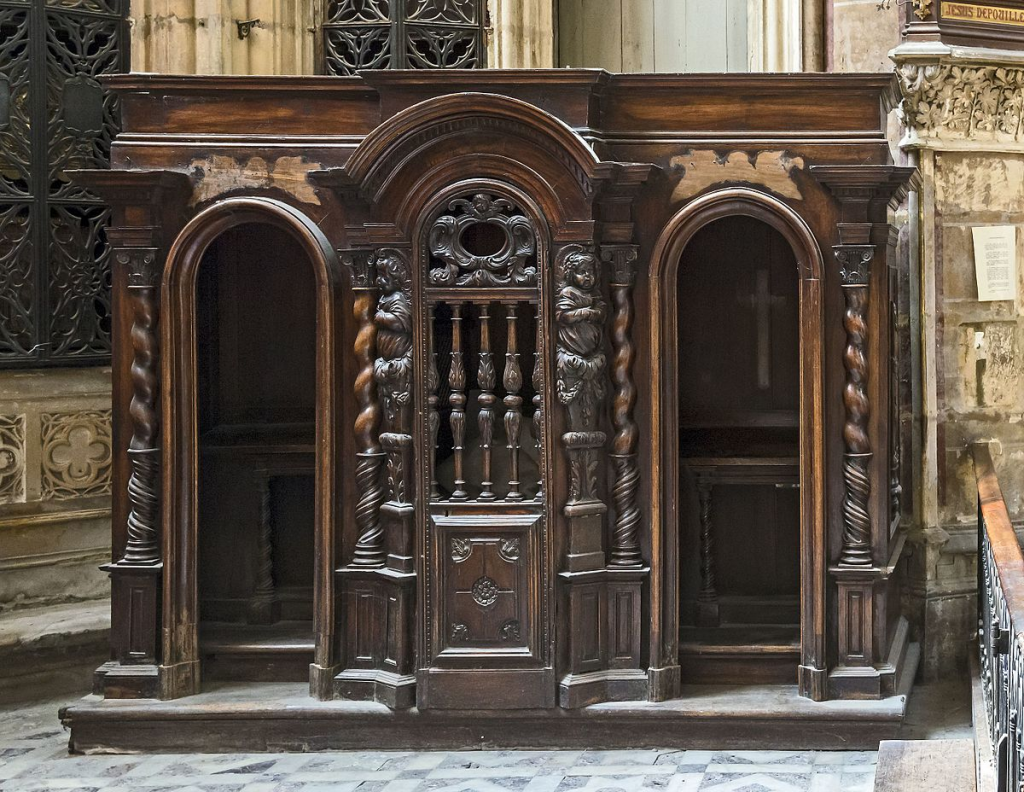 “Forgive me, Father, for I have sinned! It’s been a while since my last confession.” This sentence is the prologue to many a surprising new development in movies and novels.

Through listening in on the confession, all of a sudden it is revealed to us what the character in the confessional really is like and really did. As the story normally goes, there is now a time and place for a new direction. In these movies and stories most of the time it takes a crisis of sorts to trigger the sinner to seek confession and forgiveness; it normally doesn’t come easy.

And so it was, that in the dark, wet and miserable Scandinavian fall of 2018 I faced this major review of my professional life (in Agile and Scrum we like to call such events Retrospectives). There were some triggers in my case as well:

On top of these events there have been personal triggers, the details of which I shall spare my readers of.

So what is this Agile and Lean confession about? A few things:

Being naive about the prospect of reform

Being naive used to mean “natural or innocent”, and did not convey the images of ineptitude or lack of thinking capability that we typically associate the term with today. I obviously right now like the former definition best. Nevertheless I have to admit to being naive in this particular respect.

I really believed that when people in organizations saw the possibilities of improvement and increase in outcome that Agile and Lean patterns and mindsets provide, then they would rally behind such changes. If only we could explain and document things well enough, then the vast majority would be behind a reform.

But people don’t change by being told, they have to be shown. For most people it is very hard to go from a concept presented to an implementation; they have to see something that reflects or resembles their own situation pretty closely before the change can become attractive.

Another thing at work here is our extreme conservatism when it comes to changing. At least in our part of the world where most people are quite comfortable, the prospect of risking something in a change is really unattractive.

Well, this comes with a twist. The people who do the actual work of producing value for customers, normally jump on board introducing Agile or Scrum quickly. They experience that they are being shown the value, it is close enough to their every day life to see the potential value. They see the potential of seeing the value of their work, to have a certain satisfying autonomy and to attain mastery in their area of skill – these are all the things that build up intrinsic motivation in an individual.

Those above, typically placed in a traditional hierarchy, are often dragging their feet or outright sabotaging changes. Since they have been lifted out of the real work, they don’t easily experience the proposed benefits, what about their jobs? How are they going to change? It sounds risky. Since we humans react way stronger to a probability of a loss than that of a gain, resisting seems the best bet.

This is where I have been naive. I thought that managers in a hierarchy would adapt and figure out a way for the benefit of the organization. But no, the hierarchy is that stabilizing backbone of many larger organizations. It prevents change very effectively as it is optimized for compliance and predictability. Sometimes people in hierarchies are completely transformed into bureaucrats who only have the power to say “no” but not “yes”, a “yes” would require them to go up step on the ladder or taking a risk. The safe bet is to do nothing and say “no”.

If we attempt an agile transformation in an organization with a hierarchy, top management has to be involved and be the sponsor of the model and working conditions that seem attractive to those in the hierarchy. Like all other people, they need a fulfillment in their work; the transformation must contain roles and responsibilities for these people to subscribe to and opt in for. This has often not been done.

Trusting human rationality too much

Perhaps linked with the previous point, I have to admit to believing too strongly that human beings will make rational and well-considered decisions; that if presented with the right information people will figure it out and reach good fact-based decisions. But no, they frequently will not. There are two parts to this obstacle.

One is, that we are all under the influence of a host of cognitive biases, heuristics and illusions that block our ability to be rational. After reading Nobel laureate Daniel Kahnemann, I for one have lost my innocence in this area. The topic deserves much more, but for now let me just mention a few that dominate us all:

The other is that much of our work and problem solving these days is in the complex domain. Once again we will invoke our old companion Dave Snowden and his Cynefin theory. It is hard to work in the Complex domain as it is a constant journey of discovery. We therefore see the following breakdowns of logic – among others:

In the future I will try to focus on very critical review of solutions and business plans in teams, using workgroup methods to challenge our brain’s easy shortcuts to the best of our abilities.

Setting people up for disappointment

I didn’t deliberately set people up for disappointment, but quite a lot ended up disappointed after a while. I have been busy showing people the prospects of a better way of working and accomplishing results, but didn’t place enough effort in preparing them for resistance to be expected.

Quite often what has happened, is that an organization starts on the journey of Agility, but when it happens that something doesn’t work out according to plan – and there is always something that doesn’t, then the hierarchy moves in and overrides with orders, reorganizations and budget control. The Agile experiment is deemed a weak and romantic approach, not fit for the real world. A bit like Garfield here:

Another variation of this is that an agile approach actually does solve a specific challenge, but when the crisis is over, the hierarchy moves back to the old ways. In hindsight it can all be explained, it was not all that necessary.

A large Danish bank is currently introducing Scrum for the third time. They did it in 2001 when they urgently needed to get out on the Internet and after succeeding OK, they went back to the old model. The financial crisis in 2007-08 triggered a similar chain of events, and now another kind of crisis has started the third attempt. During the second World War II W. Edwards Deming and other introduced teamwork and production methods similar to Lean with enormous success, when the war – the crisis – was over old management moved back and everything reverted, “By 1950, the US had forgotten everything”, says Dr. Deming.

We need to remind people of the dynamics of change, where we are battling several aspects of our human nature, including the difficulty of adopting the view that leadership is a service, when all experiences seem to indicate that it is a privilege.

Failing to show people the road to be travelled

Following from the last point, I realize that I often have been so busy painting the picture of the stable state of an agile organization that I failed in giving the students ample driving directions towards it. Like telling the nineteenth century settlers of California about the beauty and bountifulness of the country without teaching them how to cross the salt and sand deserts of Nevada and the Donner Pass of the Sierra Nevada mountains.

We have to teach people how to overcome the impediments on the way. There is unexpected work that needs to be catered for, how do we do that without ruining the Scrum pattern for example? There is the occasional difficult person, who wants nothing but his own way. In addition there will always be an impatience for quick results and rapid fixes.

Finally to repeat what Daniel Kahnemann said in an interview as an old man, when asked what his main wish for mankind was, after he had spent a lifetime demonstrating how flaky our decision- and policy making really is. His answer was “I wish I could teach mankind to be a little less overconfident”.

That is going to be my last confession, having been too overconfident about my solution, remembering that although I think I have seen it all, and understand an organization’s need, there is more to observe and make sense of. Nobody understands a man until you walked a day in his shoes. An organization has to find its own compass and plot its own course, it cannot copy a hero organization or just follow a clever consultant’s path. It is their destiny, they must take responsibility; but we should supply them with all the materials, patterns, maps, tools and experiences we have, and then out of respect let them decide the course.

The journey of being a Scrum Trainer through the last 10 years has been an unmitigated pleasure filled with challenges, learning and meeting enthusiastic and talented people around the globe.

It stands in sharp contrast to the two previous decades, where we were developing, selling and supporting large IT systems to the media industry, from hairy-assed English printers to certified manio-depressive ad-agency bosses to the dark corners of American media companies. They gave us Hell. One media company prided itself of having driven 6 suppliers into bankruptcy. During a consultancy gig at the Los Angeles Times, some staff members revealed that the internal nickname for the paper was: “The Daily Miracle”, as no one understood how they managed to appear in print every day in this totally dysfunctional organization – they still manage that by the way.

The several thousand people I have had through the Scrum courses have exhibited a disproportionate level of interest, concentration and engagement compared to other areas where I have acted in a teaching capacity. I want to thank them all for that.

Many a time have I come away from courses lifted up and thankful for what I learned. Sometimes I thought maybe I got more than I managed to give them. There have even been radical voices that have suggested that I then pay them their money back, but I never went there.

My regret or confession is, as will have transpired above, that I may have raised their expectations beyond a reasonable level, made them believe that the journey would be easier, with more tailwind than is really warranted in reality.

I promised myself that this article should not be littered with quotes from clever people to see if the perceived cleverness could rub off on my text. But I will offer one quote:

“It is better to offer no excuse than a bad one.” ― George Washington

So I won’t come up with excuses, but I will take on the following commitment in the future. I will explain carefully:

So can I have my absolution now, please? Kurt Nielsen